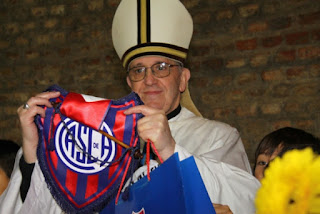 A price for the purchase of Charlton has now been agreed with two separate parties and the matter is now with the lawyers, Richard Murray has stated.

How the choice will be made between these two prospective purchasers is unclear, as is their identity. It could be a joint purchase. I found the statement so ambiguous that it could have been drafted by the Vatican. Perhaps it was.

Fans will be informed of the outcome in due course.

Rick Everitt has clarified that Murray implied that one or other of the offers would be taken up. I must have lost my ability to read between the lines taught to me by my newsagent uncle in Lakedale Road all those years ago.

However, I am a still uncertain about how one would choose between the two offers if they were similar on price. Of course, such offers sometimes involve bells and whistles such as extra sums to be paid on promotion or phased payments. There could also be issues about the £/€ exchange rate.

Crystal Palace chairman Steve Parish has admitted that the club is making contingency plans for life in the Championship. 'We are in a dangerous place,' he admitted: Contingency plan

Palace are yet another club to suffer from the myth that Alan Pardew is a good manager.

The club is pushing ahead with plans to redevelop Selhurst Park and is looking for a naming rights deal.

What colour will the smoke be? The sole Charlton director from England left standing, Richard Murray, will issue a pronouncement 'Urbis et orbe' (SE7 and the world) later this week on what, if anything, is happening in the takeover talks. This has been agreed with CAST. Murray had originally hoped that a decision one way or the other would be reached this month.

If Murray appears wearing a cork hat and carrying a toy kangaroo while 'Waltzing Matilda' plays in the background, one conclusion can be drawn. It is more likely that he will have nothing more substantive to report than 'Shooters Hill Station has been closed due to snow' (as was announced at a wintry Millwall v. Charlton clash).

He may be a dead man walking, but Alan Pardew has been allowed one last drink in the last chance saloon against Watford on Saturday: Got worse under Pardew The bemused Chinese owners cannot understand why Pardew has failed to be the motivator and tactical genius they were assured he was.

Their difficulty is that there are no credible alternatives immediately available. The days when Alan Curbishley's name would pop up in these circumstances are long since gone.

Baggies fans might have been careful what they wished for. Tony Pulis is a miserable old school so-and-so but I doubt whether he would have got them relegated.

Pardew himself said, 'It's not for want of trying. I've gone into my records [Charlton triumphs?] and used most of my repertoire, but I've still got a few things to go.' So we may see a bit more of the Tinkerman he tried at Charlton, an episode usually air brushed out of accounts of his career.

Charlton were overtaken by in form Plymouth in the play off places after they succumbed 0-2 to Shrewsbury Town at a freezing Valley this afternoon. There is no doubt that the better team won. My preview warned about the danger posed by former Leamington ace Alex Rodman and he opened the scoring for the visitors in the second half. Beckles then made it 2-0 from a corner.

All credit to Paul Hurst for getting his team to play as a cohesive unit. Karl Robinson? The less said the better. Robinson claims that the players did not implement his game plan. Why would that be?

Charlton did create three chances in the opening three minutes, but after that it was downhill all the way. Amos did save a rather tame penalty from Nolan with his legs, the ball then bouncing off the crossbar.

Charlton managed a decent opening five minutes in the second half, but then it was all Salop. After they went 2-0 down, Richard Cawley tweeted that Charlton showed a total lack of belief they could get back in the game. On 82 minutes Fosu, who had come on as a substitute, was just off target from 25 yards. Handbags at six paces on 85 minutes showed players' frustration.

Official attendance on football for a fiver day was 17,581 with 1,254 supporting the vistors.

Alan Pardew's future is in doubt after West Bromwich Albion lost 1-2 at home to Huddersfield Town. Why do people think he is a managerial genius? Seven wins out of fifty games with Palace and the Baggies.

'We could lose' admits Shrews boss

Shrewd Shrewsbury boss Paul Hurst admits that his team could lose at The Valley this afternoon. It will be a tough test of their credentials, but he has told his players just to relax and enjoy it: No worries

The coach is on its way, traffic doesn't look too bad and everyone is looking forward to a day out in London.

Earlier in the season Karl Robinson said that he reckoned Shrewsbury couldn't sustain their challenge. Admittedly, quite a few pundits had them down as relegation candidates.

The CASC Trust preview asks 'how come Shrewsbury are so good?' It seems a lot is down to the manager: Medium sized town in Shropshire

Shrewsbury have not won at The Valley since 1984, but games have been few and far between.

Referee Christopher Sarginson from across the border in Staffordshire will ensure that the Salopians get fair treatment. He is also known for adding on lots of stoppage time, but then Charlton matches are generally the last to finish anywhere.

One of the keys to success in the non-league system is sifting through players who have been let go by the Academy system to see if there are any hidden gems. Leamington have done this quite well with Danny Newton doing well for Stevenage.

In the summer there was a tussle between Leicester City and Swansea City for the signature of leading striker Courtney Baker-Richardson, a Coventry City academy product. Swansea won and he is banging in the goals and providing assists for their under 23s.

However, possibly the real star is Alex Rodman, a mainstay of Shrewsbury Town: Alex Rodman shines

It seems only yesterday when I was standing on the touchline at the New Windmill Ground chatting to his mum. He has had some injury problems recently, so Charlton may be spared him tomorrow.

Now living in Solihull, he played for the Brakes for three years while studying for a business studies degree at Nottingham Trent university. He was paid £30 a week and then in his last year at uni went to Tamworth where he earned £60-£70 a week.

He went on play for Aldershot Town and got three England C caps. However, he was then diagnosed with blood clots all over his lungs, had to go to hospital and was on Warfarin for three months. With his career apparently at an end, he broke down in tears but went on to play more than 200 games.

Now aged 31, he is taking a master's in sports directorship at Manchester Metropolitan University. 'I found the more I dive into books, the more I read and learn and challenge myself, the more I grow as a person and a player. I feel that not only am I in the best shape of my life, fitness-wise, but also intelligence-wise with the decisions I make on the pitch and off.'

Richard Cawley of the SLP has done an exclusive interview with Ezri Konsa. Read it here: Promotion hopes

The clock is ticking

I am back after my second stay in hospital and the club remains unsold, despite Richard Murray's stated belief that it was most likely to happen in February. However, Ramsgate pundit Rick Everitt reckons that any further delay will cost Roland Duchatelet: Time is running out for Roland

Some fans are sceptical of what Rick has to say because he has jumped the gun more than once. However, he does have access to multiple sources of varying credibility and they don't always tell the same story.

'Charlton till I die.' Yes, but I want my club back first with credible owners who are prepared to work with the fans to rebuild Charlton.

Price was not right

Scotland supremo Alex McLeish has told the Evening Times in Glasgow that an effort to buy Charlton came to an end because Roland wanted too much for the club. An investment company was also involved. Presumably this leaves just the Australians in the frame.
Posted by Wyn Grant at 05:54 3 comments:

Unfortunately I am back in hospital again. At least I can think about whether I prefer a kilt or a cork hat. The kilt does not need a pile of debt.But with McLeish having accepted the Scotland job, fresh doubts have arisen. However, his role seems to have been that of an advisor on the football side.
Posted by Wyn Grant at 12:44 2 comments:

Tykes take a look at Robinson

Barnsley have Karl Robinson on their short list to replace Paul Heckingbottom as manager. Garry Monk is favourite, but Robinson is reckoned to have done a 'solid' job at Charlton.

Whether new owners would be happy to see Robinson see out the season or would want to bring in their own man right away remains to be seen.

After over a fortnight in hospital, I was allowed to go home today. The NHS was marvellous throughout, thankfully averting a 30 per cent fatality rate.

What better news to greet me than growing reports that the sale of the club has been agreed. It looks like the Australians with a price tag of £45 million which represents a good deal for Roland.

With the SWAT team in charge of me for six weeks, there will be no early return to The Valley for me, but it looks like I have something to look forward to.