After yesterday's thumping at Ipswich, Johnnie Jackson reflects on his first period as season and admits that it has been a learning curve: https://londonnewsonline.co.uk/charlton-boss-johnnie-jackson-reflects-on-end-of-first-season-in-charge-and-vows-to-continue-doing-things-his-own-way/

Jacko hopes to get the core of his group of players together before the pre-season window, but this will not be easy for a floundering League One club.  We may find one or two fringe Championship players, but we may need to look downwards for hidden talent as well as using our best development players.

Jacko discussed the rolling over by the Tractors, attended by 1,972 Addicks: https://londonnewsonline.co.uk/johnnie-jackson-ipswich-thumping-is-timely-reminder-of-where-charlton-are/

I must admit I didn't even listen to the game yesterday.   For the first time since before the pandemic all my grandchildren were in one place at a family barbecue. 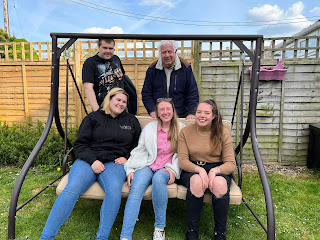 Some things are more important than football - the only sports fan there apart from me watches rugby
Posted by Wyn Grant at 23:58